Do You See What I See?

If you had read my previous post, you might have wondered why I said it was part I. Well, for starters, no, the day didn't get any worse than that, though personally, I didn't get any better either. But, that is part I because that is only one side of the coin. Yes, it was indeed a day that I could've lived without but I did go through it. Instead of regretting it, I've learned to accept it. Accept in what sense you ask? Well, what else do you think could've happened that day if it hadn't gone the way it had? Would I have been any happier? Any better? Don't think that I'm getting all emotional or spiritual. Its actually, something much more complicated. I'm talking about Perception.

By no means was that day a great day in my life, I'll agree but the day wasn't a completely miserable. For example, it had been years since I last saw Annamalai & I wasn't sure whether I would ever see him again, but, there we were, walking alongside each other & chatting. I'm not a big fan of taking a walk, but there I was, walking in the heavy rain through the flooded streets while listening to music in my headphone. I didn't do these out of compulsion. I did it because I loved doing it & that is the truth. What I'm saying might not make much sense to you, but like Lester says in American Beauty, "it will, someday".

To me, everything in life is about perception. My buddy Bharath probably feels that I'm obsessed about perceptions because I always quote it as the reason for most of the things in life. It is perception that makes us who we are. We are all unique in our own ways simply because of our perceptions. It is how we see things, how we see the world around us. But the trick is to realize that ours isn't the only perception.

In simple terms, the concept of perception can be explained using the question 'Is the glass half empty or half full?' The answer to this depends on your perception of life. But yes, everyone knows that perceptions differ; why is it such a big deal, you ask? Well, simply because it plays such a big role in our daily life. Imagine that you are watching a movie with your friend. If half a glass of water can be perceived in two different ways, the number of ways in which the movie can be perceived is limitless. At the end, you think it was a superb movie & your friend thinks that it was a stupid movie. If you keep clinging to your perception, then you will end up saying that your friend has a poor taste in movies. But the fact is, he didn't see what you saw; he saw something completely different.

As dramatic as it may sound, that is the truth. Understanding this perception and accepting it is the secret to success as well as peace of mind. It is said that some people become great leaders because they are able to inspire others. The truth is probably that, they became leaders because they were able to project their perception to others in a way that others can also see it. Once you realize the power of perception, you also start to accept the actions of others which in turn gives you peace. If this entire post made no sense to you, then you probably read something completely different from what I intended to express.. :D
at 11:31 PM No comments:

Just One of Those Days!

We have all had a day when everything seemed to go wrong. From the very moment you wake up, you feel miserable & it only gets worse as the day progresses. If there is one among you who hasn't felt this way about a day, then please leave your name in the comments & I will contact you for an autograph.
From that intro, I'm sure you would've guessed that I just went through such a day myself. Ah ha! Got you! My day was .. er.. hm.. ok.. I give up, it was miserable. Yes, there is no denying it, it was a day when the angel watching over me said “Buddy, I'm taking a coffee break” but then, it didn't return for a whole day. How was my day that bad you ask? Well, my plan for the day was very simple. I was supposed to meet an old schoolmate of mine & go for a movie.
But lets not jump into that part straight away. The day began at 6.30am when I was in the middle of my dream. I suddenly felt an urge to attack the loo and so, I woke up abruptly. Yes indeed, diarrhea. I felt miserable & got a tablet from the nearby pharmacy. I took the tablet & settled down in my chair & the power went off. Cursing my luck, I slowly got ready to leave.
All was well & I met my old friend, Annamalai at the station. We had to take a walk to reach the Prasad Multiplex which we happily did as we discussed our lives. That was the calm before the storm. As soon as we reached the theatre, we came to know that the show (Kandaswamy in tamil) was canceled. By this time, as a result of that tablet and probably because of the long walk, I started getting vomiting sensations.
My friend suggested that we go to his office, his room & then my room. But I had to politely refuse the offer & I instead suggested some snacks by the lake & returning home. He agreed, but I couldn't walk for long. Thus, we took two breaks to cover the same distance & we couldn't eat anything since I was feeling much worse now. That is one reunion cut short & I had to return home.
When I reached the station, I realized that it was Sunday & there were no trains till evening. Having no knowledge of Telugu or Hindi, I dreaded bus travels. So, I took an auto to the nearby station for which he bluntly over charged me. Then I decided to risk getting on a bus & I found one that said 'Borabanda' which in a train, is the stop before mine. So, I got on it. Unfortunately, the bus routes aren't always the same as the train routes & so, it left me at a dead end.
But that conductor understood some English & so, I got back on the same bus for the return journey to somewhere else. Following his instructions, I caught a share auto from there back to my place. But I still had a long walk back home but the whole journey took so long that I was actually feeling better now. The climate tempted me to walk back home & so I did. There were some rain drops but then again, I thought it was normal at this time of the year & so, I continued. Suddenly, it was a heavy rain but no point in stopping now, I was soaked anyway. Thus, I returned home at noon & I hadn't eaten anything so far. My friend actually called to check on me. End of Part 1.. :D
at 5:36 PM No comments:

Yes, I know, its a late post. Bharath's birthday was on 7th August. Then again, better late than never. So, here are the pictures and the video that was taken during his birthday party.

The first picture inevitably is that of the B'Day boy himself. To the right hand side, you can see our colleague Narayana. It was time for some sweet revenge & so, I found the stupid hat they made me wear just a fortnight ago. 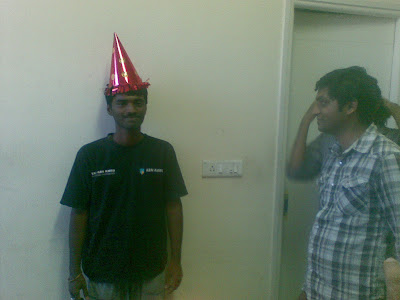 Next up is the picture of the cake made specially for our Bharath Krishnan.. :D 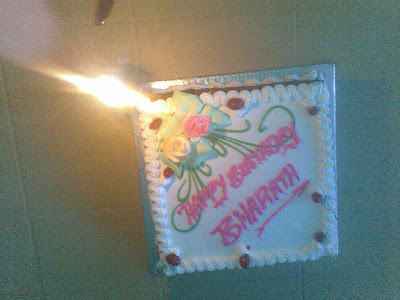 Ok, enough with the boring pictures. Here is a video of the main event..

Deepak
I'm a programmer, wannabe hacker & father. I can finish a novel is 48 hours and develop an app in 36 hours. I enjoy writing quality code and sharing what I've learnt.